The King of Attolia
by Megan Whalen Turner 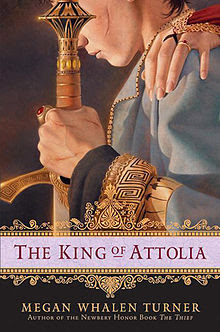 The King of Attolia is the third installment of Megan Whalen Turner's series The Queen's Thief. As I did with the two previous books, I listened to this one on CD - and Jeff Woodman is an exceptional narrator. (I reviewed The Thief here and The Queen of Attolia here.)

I am still loving the thief Gen (short for Eugenides), even in his new profession and even though this installment is told from the perspective of the soldier Costis. I didn't like this book as much as The Queen of Attolia, but Megan Whalen Turner is a great storyteller! I will certainly be reading the next book in the series, A Conspiracy of Kings.

Turner has a discussion guide for the series (at least of the four books so far) here.

Posted by alisonwonderland at 2:00 PM