I attended two different book club meetings this week. On Tuesday, our newly-formed church women's group book club had its third meeting. We met for the first time in October and discussed Sisterhood of the Traveling Pants. In November we read The Five People You Meet in Heaven. This week we discussed The Secret Life of Bees by Sue Monk Kidd.

I read The Secret Life of Bees for the first time in mid-2005, and then I listened to it on CD last summer. I didn't read it again this month, but I did think some about some of the themes and the reasons why I love this book so much. Here are three questions I'll throw out for potential discussion:

This is my favorite passage from the book:

"You know, some things don't matter that much, Lily. Like the color of a house. How big is that in the overall scheme of life? But lifting a person's heart - now, that matters. The whole problem with people is -"

"They don't know what matters and what doesn't," I said, filling in her sentence and feeling proud of myself for doing so.

"I was gonna say, The problem is they know what matters, but they don't choose it. You know how hard that is, Lily? I love May, but it was still so hard to choose Caribbean Pink. The hardest thing on earth is choosing what matters."

On Thursday I attended a neighborhood book club. I had a meeting at the office that ran long, so I was an hour late getting to the book club, but I hadn't made it to this particular group for nearly a year, so I went anyway. The book pick was The Kite Runner, which I read for another book group in October. In general, this group spends less time discussing the books we read than other groups I meet with, and, unfortunately, by the time I got to the host's home, they'd left the book behind. I did have a nice time meeting some women who'd joined the group since I was last there, as well as touching base with some I hadn't seen for months and eating some fruit and chips with avocado dip, but I'd truly rather talk about the book than most other things. As we were leaving, I did get the idea that many of the group members found the book too depressing for their taste - which saddens me because I really see it as a tale of redemption. If you've read it, I'd love to hear what you thought.

Posted by alisonwonderland at 7:26 PM 2 comments 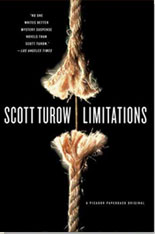 I love the cover of this book!

But I put it on hold at the library without having seen it, just because I'm a fan of Scott Turow. I read his first novel Presumed Innocent back in 1990 when I was pregnant with Jelly Bean. Lying in bed, reading half the night, I got close to the end only to discover that my paperback copy was missing a bunch of pages. Needless to say, WhiteRabbit was dispatched to the bookstore early the next day for a replacement copy! I've read all of Turow's novels since then - except Ordinary Heroes, which I didn't find time for when it first came out and haven't got back to since.

Originally a serial novel in the New York Times Magazine, Limitations isn't long - which is quite a plus for me these days - but I found it every bit as compelling as Turow's longer novels. If you like a good legal thriller, I'd certainly recommend this one.

P.S. Because the main character of the novel is named George Mason, I learned the identity of the namesake of the Cinderella team in last year's NCAA Men's Basketball Tournament. (Maybe I should have already known who George Mason was, but, alas, as a Western States girl without a lot of knowledge of the Founding Fathers, I did not. Or I'd forgotten, if I once did!)

Posted by alisonwonderland at 3:27 PM 0 comments

Posted by alisonwonderland at 11:07 PM 2 comments

Labels: By the Numbers

When the Emperor Was Divine
by Julie Otsuka 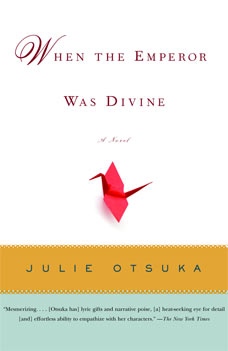 This novel was chosen for Salt Lake County's inaugural "One County, One Book" program last year. I didn't read the book during the specified period (April through October), but I finally got around to it this week. From the insert placed in the front of the book:

Diversity. It is a thread that weaves its way in and out of the lives of Americans. It has created painful memories, like the internment of Japanese-Americans in World War II, and the joyful cultural, ethnic and religious traditions that flourish in Salt Lake County today.

Otsuka's novel depicts the internment of a woman and her two young children in Topaz, Utah, during World War II. My mother-in-law was a teen during the war, and she was interned with her parents - first in Rohwer, Arkansas, and then in Gila River, Arizona. So that I can better understand this period in history, I have been particularly interested in stories about Japanese-American internment, including Snow Falling on Cedars, The Magic of Ordinary Days, and Journey to Topaz. I am glad to have added When the Emperor Was Divine to that list.

Otsuka describes well the camp experience from the viewpoint of the three main characters. Here are two of the passages I found particulary poignant:

Mostly, though, they waited. For the mail. For the news. For the bells. For breakfast and lunch and dinner. For one day to be over and the next day to begin. [Page 54]

In the morning he woke up longing for a glass of Coke. Just one, with lots of ice, and a straw. He'd sip it slowly. He'd make it last a long long time. A day. A week. A year, even. [Page 59]

For some interesting discussion questions about When the Emperor Was Divine, click here.

Posted by alisonwonderland at 12:42 PM 2 comments

Sugar Plum and I resumed our "Great Reads for Girls" library group tonight at the Draper Library. The group is designed for girls ages 8 to 12 and their mothers (or other caring adults), and we meet monthly for most of the school year. Sugar Plum and I have been attending for 3 1/2 years, since the fall before she turned eight; because she's such a terrific reader, we fudged a little on the age requirement. I always say that this group is my best tax dollars at work!

This month's book was The Egypt Game by Zilpha Keatley Snyder. First published in 1968, it was a Newbery Honor Book. I first read it many years ago; Zipha Keatley Snyder was one of my favorite authors when I was in junior high. I reread it about seven years ago when Jelly Bean read it, and she and I also read The Gypsy Game, Snyder's 1998 sequel. I didn't make the time to read The Egypt Game again this month, but I was pleased that this "classic" was chosen to be one of our "Great Reads" this year.

Next month's book is The Miraculous Journey of Edward Tulane by Kate DiCamillo.

Posted by alisonwonderland at 9:05 PM 1 comments

The Baby Merchant by Kit Reed 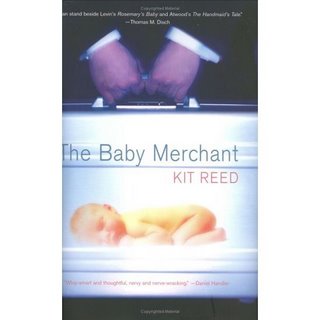 I picked this book up off the library's "New Arrivals" shelf because of the interesting cover and the quote comparing it to The Handmaid's Tale (which I absolutely loved). Here are a few of my mixed feelings about the book:

Posted by alisonwonderland at 4:53 PM 0 comments

Mary, Martha, and Me by Camille Fronk Olson

Subtitle: Seeking the One Thing That is Needful
Published in 2006. 134 pages.

For as long as I can remember, I've had a love-hate relationship with the brief account of Mary and Martha recorded in Luke 10:38-42. A number of years ago, I heard Camille Fronk Olson speak on the topic and found her insights helpful. I was excited, therefore, to see that she had published an entire book on the topic. Unfortunately, I didn't find the book as helpful as I remember her comments being - perhaps I'm just in a different place at this point. Overall, however, I liked the book and am glad that I read it. I will very likely read parts of it again.

Posted by alisonwonderland at 10:54 PM 0 comments

Next by Michael Crichton 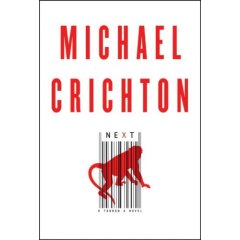 I started this novel on Christmas Day after I told my husband I wished I had something gripping to read and he reminded me that he'd picked up Crichton's latest novel at the library two days before. It has a compelling storyline with - like all of Crichton's previous novels I've read - some interesting science-related social and political commentary.

Posted by alisonwonderland at 6:18 PM 0 comments