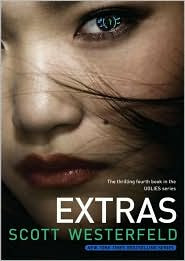 Extras is a follow-up to Scott Westerfeld's Uglies Trilogy (which I reviewed here and here and here). Set in Japan several years after the "prettytime," the book's main character is fifteen-year-old Aya Fuse, who wants nothing more than to be famous.

Overall, this was worth the time I spent listening to the audiobook. I really liked the first half or so, with its excellent commentary on social media and fame. Toward the end, though, despite some commentary on war, I found myself mostly just wishing the book was over.

Despite the lag in my interest toward the end of this book, I have enjoyed the world of the "uglies." Westerfeld's website includes a summary of all four books (featuring awesome, new covers) and an interview he did about Uglies with Simon & Schuster. I am curious, too, about his reference book Bogus to Bubbly: An Insider's Guide to the World of Uglies, for when I want to return to that world.

Posted by alisonwonderland at 12:30 PM

Labels: 2011, Audiobook, Confessions of a Serial Reader, Fall into Reading