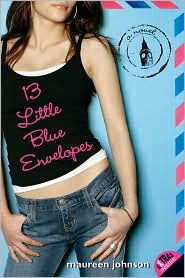 First line: As a rule, Ginny Blackstone tried to go unnoticed - something that was more or less impossible with thirty pounds (she'd weighed it) of purple-and-green backpack hanging from her back.

Brief summary (from the Library of Congress Cataloging-in-Publication Data): When seventeen-year-old Ginny receives a packet of mysterious envelopes from her favorite aunt, she leaves New Jersey to criss-cross Europe on a sort of scavenger hunt that transforms her life.

Why I read this book: I've been hearing good things about young adult novelist Maureen Johnson's work for a while, but I hadn't read any of her books until now. Tricia of Library Queue had recommended 13 Little Blue Envelopes to me as a short, quick read published in 2005, as I worked to finish the Countdown Challenge. (Tricia's review is here.)

A few random thoughts: Very nice read, particularly good for the Read-a-Thon! Ginny had her very own personal, miniature version of The Amazing Race - and, like the racers I admire most, learned more about herself in the process. I especially loved hearing about her adventures in Amsterdam and Copenhagen because, although I've never been there myself, I did recognize much of it from the photos and souvenirs that my sisters and I compiled into a scrapbook for my parents from their trip there a few years ago.

Something notable: 13 Little Blue Envelopes was an ALA Teens' Top Ten for 2006 (as was Peeps, which I also recently read.)

From the peanut gallery: My 14-year-old book-loving daughter says, "I thought Suite Scarlett was cute, so I want to read this one."

Posted by alisonwonderland at 10:01 PM