The Chocolate War by Robert Cormier 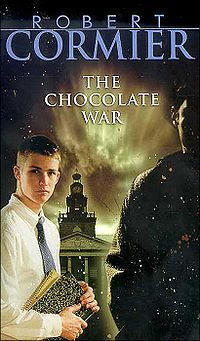 This book has been described as "a brilliant, unflinching portrait of vicious mob cruelty and conformity in an exclusive prep school."

I think my expectations of The Chocolate War were too high. Although I found parts of the novel to have been brilliantly conceived - particularly the idea that something as banal as chocolate could be the cause of so much violence - the whole thing just didn't come together for me. I wanted to go away with some new insight or having been changed in some way. That just didn't happen.

The book has been widely challenged over the years. The book is second on the American Library Association's list of the 10 most challenged books of 2007. The reasons given are as follows: Sexually Explicit, Offensive Language, Violence.

While I didn't find The Chocolate War to be all I wanted it to be, I'm still glad I read it. First, I think it's worthwhile to read books that are considered to be "classics." Second, it's important to me that I be allowed to judge a book for myself and not let those who would decide what is "good" or "appropriate" for me - and the rest of us - to do that.

Other book bloggers' reviews of The Chocolate War: If you have read and reviewed this book, I would love to link your review here. Please leave me a comment or email me your link!

Posted by alisonwonderland at 2:34 PM