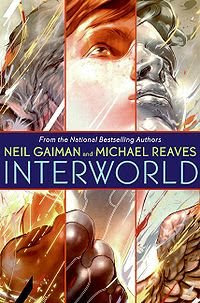 I adore tales about time travel and parallel universes and alternate realities. I also adore sweet male teenage characters with a bit of quirkiness. I adored InterWorld.

In fact, he's the kind of guy who gets lost in his own house.

But then one day, Joey gets really lost. He walks straight out of his world and into another dimension.

Joey's walk between the worlds makes him prey to two terrible forces—armies of magic and science who will do anything to harness his power to travel between dimensions.

When he sees the evil those forces are capable of, Joey makes the only possible choice: to join an army of his own, an army of versions of himself from different dimensions who all share his amazing power and who are all determined to fight to save the worlds.

Master storyteller Neil Gaiman and Emmy Award-winning science-fiction writer Michael Reaves team up to create a dazzling tale of magic, science, honor, and the destiny of one very special boy—and all the others like him.

All Neil Gaiman titles qualify for the Cardathon, and when I read Becky's review of InterWorld last December, I put it on my Cardathon list. I'd not read anything by Gaiman before - although I plan to read more in 2009. My 12yo daughter read InterWorld before I did - and she enjoyed it too.

(By the way, this was book three of my dream to read a book-a-day to the end of the year. I'm officially four books behind.)

Posted by alisonwonderland at 10:14 PM