The Lions of Little Rock
by Kristin Levine 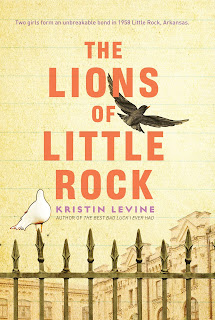 I absolutely loved this one (which was one of the 2012 Cybils finalists)!

The Lions of Little Rock provides a great exploration for middle grade readers of racism (and to a small extent sexism) in the late 1950s. It introduces such important figures as Emmett Till, whose 1955 murder was a catalyst for the Civil Rights Movement, and the Little Rock Nine, the African-American students who entered Central High in 1957 - and it looks closely at the perhaps lesser-known "Lost Year" that followed the 1958 closure of Little Rock's high schools to prevent their integration and the work of the Women's Emergency Committee to Open Our Schools.

This history lesson is wonderfully presented through the eyes of twelve-year-old Marlee as she tells us of her experiences that year, the things she learns and the ways she grows, specifically through her relationships with her family and her new friend Liz. Marlee's voice was just perfect.

I "read" this one via audiobook, excellently performed by Julia Whelan - who I've also heard read the wonderful The Sky is Everywhere and the interesting Forgotten.

By the way, for those who would like to learn more about Emmett Till, I recommend Chris Crowe's Getting Away with Murder.

Posted by alisonwonderland at 1:20 PM