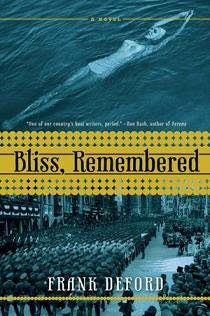 I really enjoyed this historical novel, which I read with my long-time book club a few months ago. I first became aware of the book when it was a Salt Lake County Reader's Choice nominee last year, and although I didn't find the time to read it then, I heard good things about it and was happy that the book club decided to read it together this year.

The novel starts as follows:


The summer after my mother [Sydney Stringfellow] found out that she was dying of cancer, she asked me to come visit and watch the Olympic swimming on television with her. It was 2004, when the Games were in Athens. Mom had been on the United States swimming team in the Berlin Olympics in 1936, when she was eighteen. While she never talked about the experience - she was, in fact, mysteriously silent on the subject - she would say, "That's the only thing of any real consequence I ever did in my life."

The story of Sydney's adventures in Berlin in 1936 and the aftermath of her love affair with the son of a Nazi diplomat is revealed to the reader primarily in her own voice as she shares the story with her son. I know that the narrator constantly calling her son by name ("Teddy ... Teddy ... Teddy") made my friend Chelsea crazy - but I think this story is well worth the read. The older Sydney is a delightful character, and the experiences of her younger self made for a compelling read.

NPR posted a fun story about the book and author Frank Deford here.

This year my book club has also read Erik Larson's In the Garden of Beasts and Unbroken by Laura Hillenbrand, and I think the three tie together nicely for a look at Hitler's Germany, the 1936 Olympics, and World War II.

As a group, my book club seems to gravitate toward stories set during World War II. Among the other novels we've read are Hotel on the Corner of Bitter and Sweet, Sarah's Key, Skeletons at the Feast, The True Story of Hansel and Gretel. What are some other WWII books that you'd recommend to the group?

Posted by alisonwonderland at 5:17 PM