Hotel on the Corner of Bitter and Sweet
by Jamie Ford 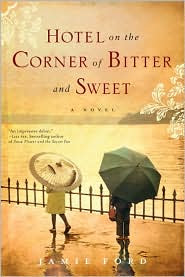 Jamie Ford's first novel explores the age-old conflicts between father and son, the beauty and sadness of what happened to Japanese Americans in the Seattle area during World War II, and the depths and longing of deep-heart love. An impressive, bitter, and sweet debut.

– Lisa See, author of Snow Flower and the Secret Fan

I read Hotel on the Corner of Bitter and Sweet with my book club in May. I had put the book on my to-read list in January when it was selected as a Salt Lake County Reader's Choice nominee, so I was happy to "have" to read it. Because my mother-in-law and her parents were interned in the camps during World War II, I am always interested in accounts of that regrettable part of American history. Two that I have particularly enjoyed are Snow Falling on Cedars and When the Emperor Was Divine. Hotel on the Corner of Bitter and Sweet is now another.

Despite the predictability of some aspects of the plot and a few anachronisms concerning the use of technology, I found Jamie Ford's writing to be lovely and heartfelt. Here are few of my favorite passages:

School was out of the question for the day. The thought of being tardy and facing the ridicule of his classmates was almost as horrible as the thought of enduring their happiness - their joy and satisfaction at knowing that Keiko's family, and her whole neighborhood, were being taken away. All smiles. Victorious in their home-front battle with a hated enemy. Even if that enemy spoke the same language and had said the Pledge of Allegiance alongside them since kindergarten. [p. 136]

Like so many things Henry had wanted in life - like his father, his marriage, his life - it had arrived a little damaged. Imperfect. But he didn't care, this was all he'd wanted. Something to hope for, and he'd found it. It didn't matter what condition it was in. [p. 142]

Henry was learning that time apart has a way of creating distance - more than the mountains and time zone separating them. Real distance, the kind that makes you ache and stop wondering. Longing so bad that it begins to hurt to care so much. [p. 245}

For more information, check out the following:

Posted by alisonwonderland at 11:32 AM