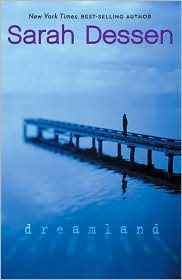 When her older sister runs away, 16-year-old Caitlin O'Koren tries to fill the gaping void in her life with cheerleading. Yet after falling from a cheerleading pyramid, she struggles with choices that send her life into a downward spiral. Mesmerized by affluent bad boy Rogerson Biscoe, Caitlin abandons her parents and friends for the seductive lure of his dangerous yet exciting world. But the pain of Rogerson's controlling rage soon shatters the pleasure of their clandestine romance. Trapped in a dizzying maelstrom of abuse, Caitlin seeks the solace of a drug-induced dreamland.

I liked the first three-quarters of the book better than the ending. There was too much wrapping everything up in neat packages for me - and in ways that seemed quite unrealistic. I do think that the topic of teen dating violence is an important one, and I applaud Dessen for taking it on.

Posted by alisonwonderland at 10:41 PM