If You Come Softly
by Jacqueline Woodson 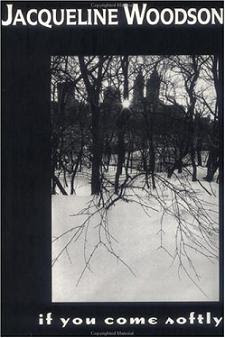 First line: My mother calls to me from the bottom of the stairs, and I pull myself slowly from a deep sleep.

Plot summary (from the Library of Congress Cataloging-in-Publication Data): After meeting at their private school in New York, fifteen-year-old Jeremiah, who is black and whose parents are separated, and Ellie, who is white and whose mother has twice abandoned her, fall in love and then try to cope with people's reactions.

Epigraph (taken from the poem by Audre Lorde):

If you come as softly
as the wind within the trees
You may hear what I hear
See what sorrow sees.

Why I read this book: Almost a year ago, I read Alexa's review of If You Come Softly and knew that I wanted to read it. In August, the book came back into my consciousness when I saw on Facebook that Alice was reading it. I put it on my Fall into Reading list in September, and now I've finally read it.

A few random thoughts: If You Come Softly is both a sweet and tender love story and a poignant look at race relations in America. It is a quick read. There aren't a lot of excess words. In its brevity and its sparseness lies its power.

This is the first of Jacqueline Woodson's books that I've read, although I've had her on my radar for a while. I will definitely be reading more of this prolific writer - beginning with the sequel to If You Come Softly, Behind You.

Posted by alisonwonderland at 10:26 PM