The Wives of Henry Oades
by Johanna Moran 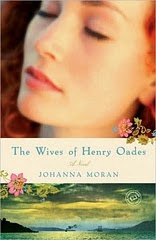 I read The Wives of Henry Oades with the Book Buddies online book group in August. Although I hadn't heard of the book before it was suggested for the group, the premise intrigued me. From the publisher's website:

When Henry Oades accepts an accountancy post in New Zealand, his wife, Margaret, and their children follow him to exotic Wellington. But while Henry is an adventurer, Margaret is not. Their new home is rougher and more rustic than they expected—and a single night of tragedy shatters the family when the native Maori stage an uprising, kidnapping Margaret and her children.

For months, Henry scours the surrounding wilderness, until all hope is lost and his wife and children are presumed dead. Grief-stricken, he books passage to California. There he marries Nancy Foreland, a young widow with a new baby, and it seems they’ve both found happiness in the midst of their mourning—until Henry’s first wife and children show up, alive and having finally escaped captivity.

Narrated primarily by the two wives, and based on a real-life legal case, The Wives of Henry Oades is the riveting story of what happens when Henry, Margaret, and Nancy face persecution for bigamy. Exploring the intricacies of marriage, the construction of family, the changing world of the late 1800s, and the strength of two remarkable women, Johanna Moran turns this unusual family’s story into an unforgettable page-turning drama.

Like Shanghai Girls and The Help - both of which the Book Buddies read and discussed just prior to reading The Wives of Henry Oades - this is a novel about women and their stories. I found myself identifying with both wives, unable to take sides. In the end, I think the theme of the book is the power of women's connections, a theme foreshadowed early in the novel:

Margaret tried, but she couldn't make [Henry] understand an affection forged in a single morning. The small transactions between women, particularly mothers, cannot adequately be explained to a man. Some, like hers with Mrs. Randolph, will bind women for life.

For more information, check out Johanna Moran's website - I particularly enjoyed "The Story Behind the Story" - and reviews by Becky of Becky's Book Reviews and Amy of My Friend Amy.

Posted by alisonwonderland at 2:17 PM