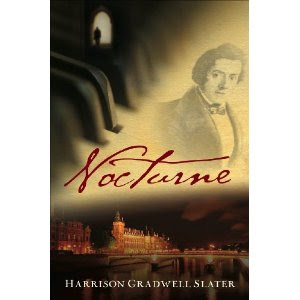 I received a complimentary copy of Nocturne from publicist Tricia van Dockum at Ollie Media.
Thanks, Tricia!
First sentence: What made you this way, Artemisia?

Brief summary of the plot: Hoping to leave behind a bad relationship, photographer Artemisia Talbot takes an assignment in partnership with musicologist Matthew Pierce for an article about Chopin's Paris. In addition to exploring the places Chopin lived in Paris, Artemisia and Matthew visit Warsaw, where Matthew purchases a diary that describes Chopin's ill-fated love affair with Maria Wodzinska. Unfortunately, Artemisia's former lover follows her to Europe, threatening to ruin her newfound happiness.

As she and Matthew walked toward Place Vendome, Artemisia marveled at the artistic achievements of the Parisians. "Artists are the canaries in the coal mine," Matthew said. "They are the indicators of the well-being of a city. Artists of all kinds have always flocked to Paris. That says everything."

What I liked about this book: First of all, I think that the idea of a novel with a soundtrack is brilliant! Nocturne is accompanied by a CD with 22 tracks of piano music by Chopin performed by Slater, and the music is beautiful. Just the night before I started reading Nocturne, I was talking to some book club friends about Gerald Elias's Devil's Trill and how interesting it would be to have a CD of the music that is mentioned in the novel. As Slater says in the Reader's Guide of Nocturne:

[The concept of a novel with a soundtrack] is an idea whose time has come, particularly in this age of multimedia, interactive media and new forms of communication. Nocturne is at the cusp of a new era of experimental trends in the publishing industry, all of which will make reading a more interesting and varied experience for everyone.

I also enjoyed the overall storyline of the novel. Perhaps the strongest aspect of the novel, the interspersion of the contents of Maria Wodzinska's diary with the contemporary happenings of the novel reminded me in some ways of People of the Book by Geraldine Brooks. Beyond that, who doesn't like to read about the blossoming of love threatened by a deranged, obsessive stalker?

What I didn't like about this book: Somehow, despite the great potential, the book just doesn't come together in a very satisfying way. I sometimes felt that Slater wasn't sure what kind of book he wanted to write - or maybe that he was confused about his style. Sometimes I felt like I was reading a James Patterson suspense thriller, with short chapters, lots of action, and much dialogue. Other times, however, I felt like Slater was trying to write a literary novel, and the dissonance was jarring to me as a reader. In a couple of places, there were also some intimations of the occult à la Barbara Michaels, but nothing ever came of that. Worst of all, as I read, a term I learned from my high school composition teacher kept coming to mind - purple prose - and that kept me from simply enjoying the experience of watching the story unfold.

To share in the joy of words and music: While I didn't like Nocturne nearly as much as I wished I had, I don't doubt that there are readers - especially readers who are also music lovers - who would enjoy it more than I did. After I let my daughter, who is a music major, borrow the book and CD, I'd love to pass them along to another interested reader. Leave a comment if you'd be interested, and I will randomly pick one lucky reader from those who comment by Saturday, May 1.

Posted by alisonwonderland at 11:58 PM