Lock and Key by Sarah Dessen 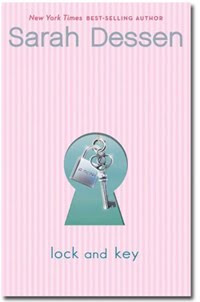 This was the third of Dessen's books that I've read. (I recently finished my fourth, Keeping the Moon, as well, and I've also started That Summer.)

I really liked Lock and Key. I'd heard someone say that the ending was disappointing, so I was expecting that - but I thought the the ending was terrific. It gives hope for the future, but uncertainty too - so we can imagine it in a lot of different ways (or Dessen can write about it, which I would love).

I like Dessen's writing style, especially that it's easy to read. She doesn't avoid difficult topics, but she isn't in-your-face about them. I like the symbolism and metaphors.

Check out some additional information about Lock and Key on Dessen's website.

Posted by alisonwonderland at 7:48 PM