The Boy Book by E. Lockhart

Subtitled A Study of Habits and Behaviors, Plus Techniques for Taming Them.
Published in 2006. 193 pages. 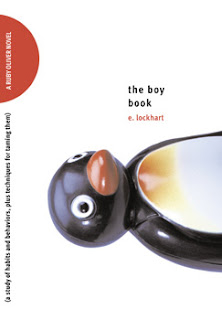 I read this sequel to The Boyfriend List on my flight home from Fort Lauderdale at the end of June. I continue to love Ruby Oliver, who reminds me of my 13yo daughter, and I was pleased that Ruby seems to be growing up and discovering some important things about life:

If this were a movie of my life, I would go on for a couple of weeks in a state of dejection, after which Noel would appear on my doorstep one day begging forgiveness for being so cranky and hopefully bringing some quality gift. We would kiss somewhere cinematic, like outside in a snowstorm (Bridget Jones) or on an ice rink (Serendipity) or on a fire escape (Pretty Woman). And that would be the end.

But as I have learned, to my disappointment, life is never like the movies. And as I have also learned, thanks to what is now nine months of therapy (with one month-long hiatus): if you don't want to be in an argument with someone, it is probably best to try to solve the problem, rather than lying around hoping the other person will do it for you. Like Doctor Z says, "We can't know or say what other people will do. You have to think what you want to do to get the situation where you want it to be." [page 177]

I also loved this passage in which Ruby tries to identify a school activity that would appeal to her (and reveals her great sense of humor) - and then her commentary on the activity she finds:

"I like to swim," I said. "And read. And watch movies. But can you imagine a catalog description for that? 'Exploring the Shallow Life: Students will enjoy a double feature of Love Actually and Bridget Jones's Diary, wallowing in the hotness of Hugh Grant and Colin Firth, followed by thrift-store shopping, intensive reading of mystery novels, and a dip in the pool. Evenings will be spent consuming Popsicles and experimenting with cosmetics.'" [page 72]

Mr. Wallace went on to explain that the project involved going to a retreat on a tiny island in the San Juans, off the Seattle coast, where we'd read and discuss meaningful philosophical stuff in the morning; then, in the afternoon, we'd swim in the pool, hike around the island and take turns making dinner. Evenings, we'd watch important movies from the history of cinema that would continue to spur our thought processes about the philosphical issues in the readings.

It was Exploring the Shallow Life, only deep. [page 73]

Note: The book does include some fairly explicit references to sexual experimentation.

Posted by alisonwonderland at 7:03 PM