The Shape of Mercy by Susan Meissner 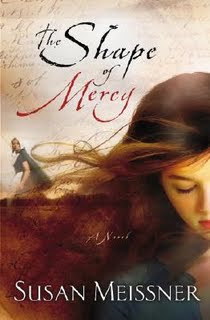 I chose The Shape of Mercy, which had been on my to-read list since 2009, as the June read for Natalie's Book Club. Only three of the group members read the book, but the six of us who were able to meet for lunch earlier this week still had a great discussion. 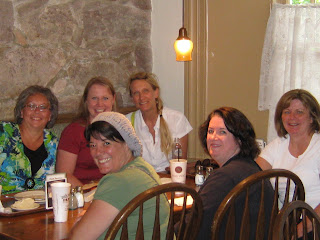 Back row (l-r) - Sue, Natalie, Holly.
Front row (l-r) - Leslie, Alison, Linda.
Like Katherine Howe's The Physick Book of Deliverance Dane, this novel alternates between a contemporary storyline and one set during the Salem witch trials - which I find to be a fascinating time in history. It tells of the lives of three women - Lauren, a young college student, who goes to work for Abigail, an elderly librarian, to transcribe the diary of Mercy, a woman accused as a witch in 1692. The historical aspects actually seemed to be better developed, even though that story is told only through sparse diary entries.

A work of Christian fiction, The Shape of Mercy addresses the important theme of judgment. I think I agree with a member of the book group who described the moral message as "a little heavy-handed" - but it also provided me with good food for thought. What assumptions do I make about other people? How does that affect my ability to connect with or compassionately serve them? Do my judgments ever harm others?

Just today I discovered that Susan Meissner wrote a blog from October 2008 to November 2010 related to The Shape of Mercy. (You can find it here.) As explained in the first post of the blog:


Have you ever wished the characters you've read about in a book lived on after you turned the last page, that you had a backstage pass to their lives beyond the confines of the book's pages?

Here on The Shape of Mercy blog, Lauren, Abigail, Clarissa [a secondary character], and even Mercy, will live on in posts that will appear on Mondays and Fridays. We begin where the book left off.

What a fun concept!

A day or two before the book group meeting, I jotted down some possible discussion questions while I waited at the auto repair shop for my car. We considered some but not all of these at our lunch. (NOTE: I don't consider any of the questions to necessarily be "spoilers" - but if you, like my friend Chelsea, don't want to know much about a book before reading it, come back later to read the questions.)

Posted by alisonwonderland at 2:54 PM