After Ever After by Jordan Sonnenblick

Published in 2010 by Scholastic Inc.
Audiobook performed by Nick Podehl. 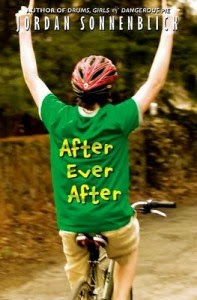 After Ever After is the fabulous sequel to Drums, Girls, and Dangerous Pie (which I read in 2010). There are some great life lessons here, maybe especially for young teens but actually for everyone. As the back cover says, "After Ever After is a real, tender, hopeful, and funny story about what happens when you stop surviving and start living again."

I was thrilled that I was able to convince my 12-year-old son to read both books. He's usually more excited about fantasy than he is about realistic fiction, but he ended up loving these! I think he could really relate to both eighth-grade protagonists - Steven in Drums, Girls, and Dangerous Pie and his little brother Jeffrey in After Ever After. (That parallelism was very fun for me too.)

I "read" this via audiobook. It has four discs, running 4 hours and 37 minutes. The narrator was fantastic!

After Ever After is a nominee for the 2012 Beehive awards, sponsored by the Children's Literature Association of Utah.

Posted by alisonwonderland at 10:30 AM