The Mockingbirds by Daisy Whitney 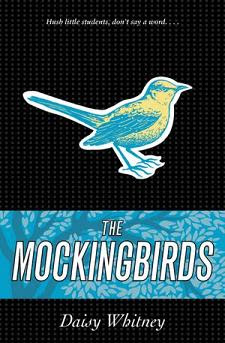 Daisy Whitney's "Twitter version" of her debut novel (as revealed on Elana Johnson's blog) is as follows:

The Mockingbirds is the story of an underground student-run justice system at a prestigious boarding school and the date rape case they try.

Thought-provoking and highly readable, The Mockingbirds addresses an important concept for teens - girls and boys - to fully understand:

If a person does not say 'no,' that does not mean he or she said 'yes.' Silence does not equal consent. Silence could mean fear, confusion, inebriation. The only thing that means yes is yes. A lack of yes is a no.

The book includes resources in the back, and there is a Reading Group Guide here.

A sequel to The Mockingbirds, titled The Rivals, is due out next year. I'll definitely be visiting Themis Academy again!

Posted by alisonwonderland at 11:00 PM

Labels: 2011, Confessions of a Serial Reader, The Contemps