The House at Riverton by Kate Morton 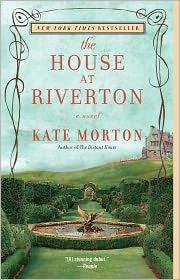 This was the September pick for Natalie's Book Club, and I didn't know anything about it before I started reading. I was sucked in from the very first sentence!

Last November I had a nightmare.
Does that remind you of Daphne du Maurier's Rebecca? It did me!

I really enjoyed the book club discussion, which we had over lunch at Blue Lemon. Mostly we talked about the ending of the book, about what was foreshadowed, about what was surprising, about how it fit together so well.

One short passage really struck me when I read it, and I've been thinking about it a lot.

While I wasn't certain how I felt about spiritualists, I was certain enough about the type of people who were drawn to them. Only people unhappy in the present seek to know the future.


I'd not read anything by Kate Morton before I read The House at Riverton, but I will certainly be looking for more of her novels!

Posted by alisonwonderland at 9:00 PM