Love is a Mix Tape by Rob Sheffield

Subtitled Life and Loss, One Song at a Time.
Published in 2007.
Audiobook read by the author. 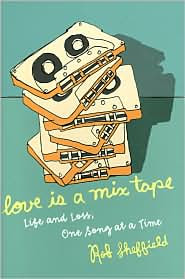 In the 1990s, a shy music geek named Rob Sheffield met a hell-raising Appalachian punk-rock girl named Renée, who was way too cool for him but fell in love with him anyway. They had nothing in common except that they both loved music. Music brought them together and kept them together. And it was music that would help Rob through a sudden, unfathomable loss.

In Love is a Mix Tape, Rob, now a writer for Rolling Stone, uses the songs on fifteen mix tapes to tell the story of his brief time with Renée. From Elvis to Missy Elliott, the Rolling Stones to Yo La Tengo, the songs on these tapes make up the soundtrack to their lives. This is Rob's tribute to music, to the decade that shaped him, but most of all to one unforgettable woman.

By turns heart-warming, heart-breaking, and laugh-out-loud funny, this memoir on audiobook provided me with several enjoyable commutes. I'm not familiar with a lot of the music that sets the background for each chapter, but that was okay. The emotions came through anyway - and I can totally relate to those.

I look forward to reading Sheffield's new book Talking to Girls About Duran Duran: One Young Man's Quest for True Love and a Cooler Haircut. I suspect that I'm more familiar with 80s music than I am with the music of the 90s.

If you were to make a mix tape, what would you put on it?

Posted by alisonwonderland at 10:06 PM