Subtitled How to Express Heartfelt Commitment to Your Mate. First published in 1992. Audiobook read by the author. 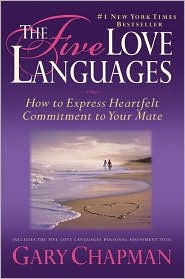 I was already familiar with Gary Chapman's five love languages before I listened to this audiobook. I'd attended a few workshops on the subject, and I'd listened to The Five Love Languages of Children on CD. But I decided to read this one because my church women's group planned to discuss it at their February meeting. As it turned out, I attended an award ceremony with my daughter that night and missed the discussion - but I'm still glad I read the book.

The book itself is highly readable, with examples and anecdotes illustrating each of Chapman's theories. In some cases he shows how he developed the theories, and he also offers concrete suggestions for those who want to apply his teachings to their lives.

Here are a few of my responses to the concepts Chapman presents:

Posted by alisonwonderland at 6:38 AM