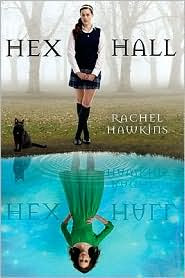 From the book jacket:

Three years ago, Sophie Mercer discovered that she was a witch. It's gotten her into a few scrapes. Her non-gifted mother has been as supportive as possible, consulting Sophie's estranged father - and elusive European warlock - only when necessary. But when Sophie attracts too much human attention for a prom-night spell gone horribly wrong, it's her dad who decides her punishment: exile to Hex Hall, an isolated reform school for wayward Prodigium, a.k.a. witches, faeries, and shapeshifters.

Fun and imaginative! I nominated Hex Hall for a 2010 Cybils Award in Teen Fantasy/Science Fiction. The finalists will be announced on January 1.

The ending was abrupt, I thought, and I'm not sure what I think about what's going to have to come in the sequel Demonglass. But I'll definitely be reading it, so I guess I'm spellbound.

From the peanut gallery: My 14-year-old book-loving daughter says, "It was good. Not that original though. The historical aspect of it was interesting. The ending was abrupt."

Posted by alisonwonderland at 5:03 PM

Labels: 2010, A ~ Z, Confessions of a Serial Reader, Fall into Reading