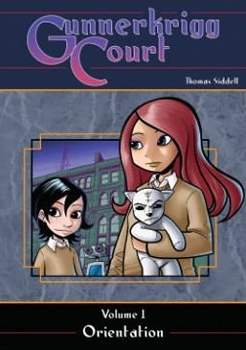 This is the first collection of Tom Siddell's popular and award-winning webcomic (www.gunnerkrigg.com). It received a 2009 Cybils Award for Young Adult Graphic Novel.

My 11-year-old son is a big fan of Gunnerkrigg Court - both the graphic novels and on the web. He tells me that he loves the combination of sci-fi and fantasy, and also that he likes the characters and the connections. ("Even if the main characters are girls," he says, "I still like the books.")

An entry on Wikipedia describes the webcomic as follows:

The comic tells the story of Antimony Carver, a young girl who has just started attending a strange and mysterious school called Gunnerkrigg Court, and the events that unfold around her as she becomes embroiled in political intrigues between Gunnerkrigg Court and the inhabitants of the Gillitie Wood, a forest outside the school. The comic's style and themes include elements from science, fantasy creatures, mythology from a variety of traditions, and alchemical symbols and theories; the literary style is heavily influenced by mystery and manga comics.

I've finally read the first volume. The illustrations are beautiful, but I have to admit that I'm not sure I "get it." But now, my son says, I have to read the second one!

Posted by alisonwonderland at 10:40 PM