The Day the Falls Stood Still
by Cathy Marie Buchanan 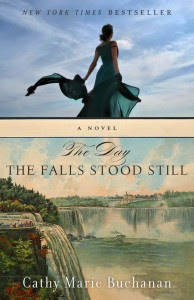 Author Cathy Buchanan contacted me about reading and reviewing her book. She had the publisher send me a complimentary copy of the trade paperback. Thanks, Cathy!
This debut novel - which is a current Salt Lake County Reader's Choice nominee - is a beautifully written piece of historical fiction, set in the early 1900s. I have never visited Niagara Falls, but this book invoked in me such sense of the place that I will need to do that someday.

The novel is divided into two parts. Book 1 - which I think could almost stand on its own as a young adult novel - is primarily the coming-of-age story of seventeen-year-old Bess Heath. This section of the book reminded me in some ways of Jennifer Donnelly's A Northern Light (which I loved). Here is a favorite passage from that section of the book:

Stays run the length of the side seams; also over the ribs, front and back; and alongside the hooks and eyes of the front opening, and the grommets of the back opening through which the lace is pulled. In my camisole and drawers, I fasten hooks and eyes from just beneath my sternum to well below my hips. I have heard of the fainting and know the complaints, also the rhetoric of the suffragettes, yet a corset is a rite of passage, which places me a step closer to making decisions for myself. As Mother begins to tighten the laces, the irony in such thinking strikes me, and then, with the final tug, any notion linking a corset with independence seems entirely foolish.

Book 2 expands Bess's story into more of a family drama with some exploration of meaningful minor themes, including some that could be considered commentary on current society. These include the conflict between preserving nature and using nature for the benefit of humankind, the impact of war on individuals and families, views on energy and its generation, and condemnation of materialism. I particularly loved some of the thoughts on faith, such as this passage:

I have stood at the brink of the falls, that thin line that separates eternity from time. I have looked for aberrations in the rising mist, those flecks of shimmering silver, those orbs of color a shade more intense than their surroundings that I had once seen from my window seat. I have counted to ten before opening my eyelids, and let my gaze become unfocused, and crossed and uncrossed my eyes, and waited in the mist until I was soaked through to the bone, until it finally occurred to me that faith is believing without proof. Someday I would stop needing proof.

The title of the book is taken from an historical event that took place years before the action of the novel. It is a wonderful metaphor for those moments in life that give us great pause, those events that are so defining as to be a point after which nothing will never be the same as it was before.

I would love to pass my copy of The Day the Falls Stood Still to another interested reader. Leave a comment if you'd be interested, and I will randomly select one lucky reader from those who comment by Sunday, October 10.

Posted by alisonwonderland at 4:37 PM