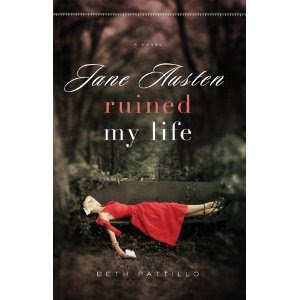 Unlike some of my friends, I am not a fan of Jane Austen. (I tried to read Emma with a book club a number of years ago and ended up renting the movie with Gwyneth Paltrow instead.) Accordingly, I never would have picked up Jane Austen Ruined My Life had it not been a book club pick. I do have a passing knowledge of Austen's novels and characters, and that was enough that I was able to enjoy this chick lit novel about an Austen scholar who discovers some things about herself as she embarks on some research into Austen's life.

As the Emma of this novel tries to determine who she is and what she wants to do with her life, she ponders on the advice of both her parents and her now-former husband. Her parents pushed her to become a college professor because they saw that as more providing more security than being an author. Her husband was more blunt: "Don't waste your energy chasing some pipe dream." In a favorite passage of mine, Emma says:

I'd believed them, of course, Edward and my parents. Why shouldn't I have? Doing the right thing meant doing the safe thing [page 85].

I do want to say that I liked the ending of the novel a lot. I was going to be disappointed if it had ended in the way that I was anticipating it would end - so I was pleasantly surprised.

A product of the Christian publishing house Guideposts, this novel isn't overtly religious in tone, but I liked this question in the Reading Group Guide at the back of the book (which addresses a concept I've been pondering lately in watching the television serves FlashForward):

Emma's father [who is a minister] taught her that God had a plan for her life. Do you believe this is true? If so, how specific is God's plan? How much choice do we have in the matter? If not, do you believe that life is a matter of random choices and consequences? What led you to this belief?

For some additional reviews, visit S. Krishna's Books, One Literature Nut, Puss Reboots, and Confessions of a Book Habitué.

Posted by alisonwonderland at 3:32 PM