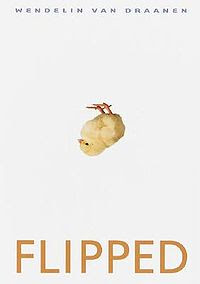 For some reason, I expected this "he said/she said" story to be similar in tone to E. Lockhart's Ruby Oliver books. The first chapter, therefore, was a little disconcerting to me, as I adjusted to the more serious tone. Once I settled in, though, I was hooked!

Flipped is a sweet adolescent love story that also deals with some serious themes. The character Juli reminded me a bit of Jerry Spinelli's Stargirl. I loved her view of the world. I also loved watching Bryce mature.

Wendelin Van Draanen is best known for the Sammy Keyes mysteries for children, none of which I've read. I understand she has also written at least two other young adult novels.

I noticed on IMDb that a movie version of Flipped is scheduled to be released in September 2010.

Posted by alisonwonderland at 12:10 AM