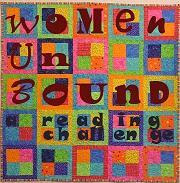 Co-hosted by Aarti, Care, and Eva
Participants in this challenge are encouraged to read nonfiction and fiction books related to "women’s studies."

According to a Wikipedia entry, women's studies is an interdisciplinary academic field devoted to topics concerning women, feminism, gender, and politics. It often includes feminist theory, women's history, women's fiction, women's health, feminist art, feminist psychoanalysis, and the feminist and gender studies-influenced practice of most of the humanities and social sciences.

There are three levels for readers:

I'm planning to read as a "suffragette." Here are some of the many books I'm considering:

Posted by alisonwonderland at 2:22 PM