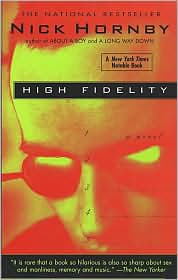 First sentence (which is also the first of many "top five" lists): My desert-island, all-time, top five most memorable split-ups, in chronological order:

Why I read this book: I admit that I'd probably not have picked up High Fidelity on my own. But it was a book club pick - and one of the things I love most about being a book club is "having" to read things that I might not have read otherwise.

What I thought: It took a few chapters for thirty-something record store owner and compulsive "top five" list maker Rob Fleming to grow on me. But once he did, I found his story to be amusing and even touching - even if we don't share tastes in music. I'd read John Green's An Abundance of Katherines shortly before I read High Fidelity, and I've got to assume that High Fidelity was an influence on Green, as I can see a younger, more geeky Rob Fleming in Colin Singleton.

What I need to do: High Fidelity was made into a movie in 2000. It stars one of my favorite actors, John Cusack. I've got to check it out!

Posted by alisonwonderland at 11:19 PM