Diary of a Wimpy Kid by Jeff Kinney 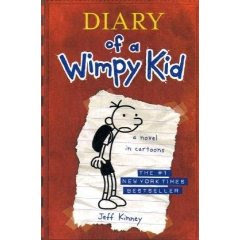 I read this one at the recommendation of my nine-year-old son. A reluctant reader, particularly of fiction, he was so excited about this series - which he heard about from some school friends - that he asked his grandmother for both Diary of a Wimpy Kid and the sequel Rodrick Rules for Christmas. (A third book The Last Straw has just been published.) I got him the Do-It-Yourself Book as a Christmas gift too. He says that this series is "awesome!"

Diary of a Wimpy Kid is "a novel in cartoons" - not really a graphic novel, but designed to look like a journal of lined paper with drawings in it. I enjoyed it, even if I found much of the humor to be more appreciated by a nine-year-old boy than by his mom. I do like the mom in the book; we see her through the eyes of Greg (the "wimpy kid" of the title) but it's evident that she's a feminist and good at imposing consequences for bad behavior. Most of all, I love that my son has a book that he loves!

Posted by alisonwonderland at 11:18 AM