The Zookeeper's Wife: A War Story
by Diane Ackerman 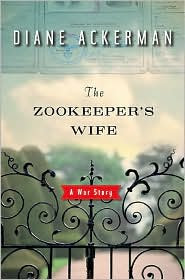 I loved this historical account of a Polish atheist zookeeper and his Christian wife who helped save over 300 Jews during World War II. I learned some things about the war that I didn't know before, such as the Nazi's pursuit of Aryan perfection in the animal kingdom (in addition to among humans). I enjoyed a few laugh-out-loud moments about the absurdities of the crazy combinations of human and animal existence in the zoo. Most of all, I was moved - often to tears - by the small acts of heroism related in the book that ultimately made the defeat of the Nazis possible.

A good deal of the book is based on the diaries of the "the zookeeper's wife." Here are two of my favorites of her reflections:

During this time of seismic upheaval, more and more Ghetto dwellers washed up on the deck of the villa, arriving weather-beaten, "like shipwrecked souls," Antonina wrote in her diary. "We felt that our house wasn't a light, flimsy boat dancing on high waves, but a Captain Nemo's submarine gliding through deep ocean on its journey to a safe port." Meanwhile, the war storm blew violently, scaring all, and "casting a shadow on the lives of our Guests, who fled from the entrance of crematoriums and the thresholds of gas chambers," needing more than refuge. "They desperately needed hope that a safe haven even existed, that the war's horrors would one day end," while they drifted along in the strange villa even its owners referred to as an ark. [pages 208-209]

Why was it, [Antonina] asked herself, that "animals can sometimes subdue their predatory ways in only a few months, while humans, despite centuries of refinement, can quickly grow more savage than any beast"? [page 239]

I discovered that The Zookeeper's Wife recently received the Orion Book Award, which is "conferred annually to a book that deepens our connection to the natural world, presents new ideas about our relationship with nature, and achieves excellence in writing." (I am, therefore, including this book on my Book Awards Reading Challenge list.)

Posted by alisonwonderland at 9:05 PM